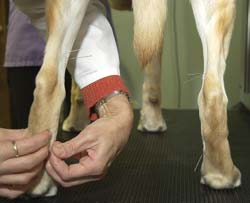 Acupuncture is an ancient Chinese therapy that is thousands of years old. It is based on the Chinese belief that all life is composed of two equal and opposite energy forces, yin and yang, which comprise the body’s inner energy force or Qi. Imbalance between yin (dark, passive) and yang (light, active) results in deficient or imbalanced Qi, and subsequent illness or disease. Energy or Qi is believed to circulate rhythmically through the body in 24-hour cycles via pathways called meridians.

There are 12 main meridians, which correspond to the organs of the body, as well as numerous extra meridians. These pathways have both cutaneous (skin) and internal components, connecting a primary organ with a cutaneous area. Disease in a particular organ may result in blockage of energy flow along the organ’s meridian. Alternatively, disease along a meridian (i.e. cutaneous or musculoskeletal disease) may also result in blockage of flow along the meridian. In either case, the body’s energy flow is disrupted, resulting in imbalance and poor health. Acupuncture utilizes fine needles at carefully chosen acupuncture points to restore the free flow of energy in the body.

Acupuncture is not effective for everything, just as antibiotics don’t cure everything. Diseases in which acupuncture is particularly helpful include arthritis, nerve damage or paralysis, kidney disease, seizures, bloat, and certain organ diseases. Acupuncture is holistic therapy, addressing the individual as a whole, identifying inherent weaknesses that predispose to certain symptoms and conditions. Treatment can be aimed at multiple conditions affecting a particular individual, since it strengthens the entire body, resulting in a healthier individual with a decreased tendency to become ill.

From a western perspective, acupuncture points mark the location of microtubules beneath the skin, which house tiny nerves and blood vessels. Insertion of acupuncture needles at these points stimulates a sensory nerve, which sends an impulse to the spinal cord and the brain, resulting in the release of numerous regulatory hormones and endorphins (natural painkillers). Local effects at the site of the needle insertion include improved blood flow, reduced inflammation, and relaxation or contraction of muscles.

Font Resize
Contrast
Accessibility by WAH
Call Us Text Us